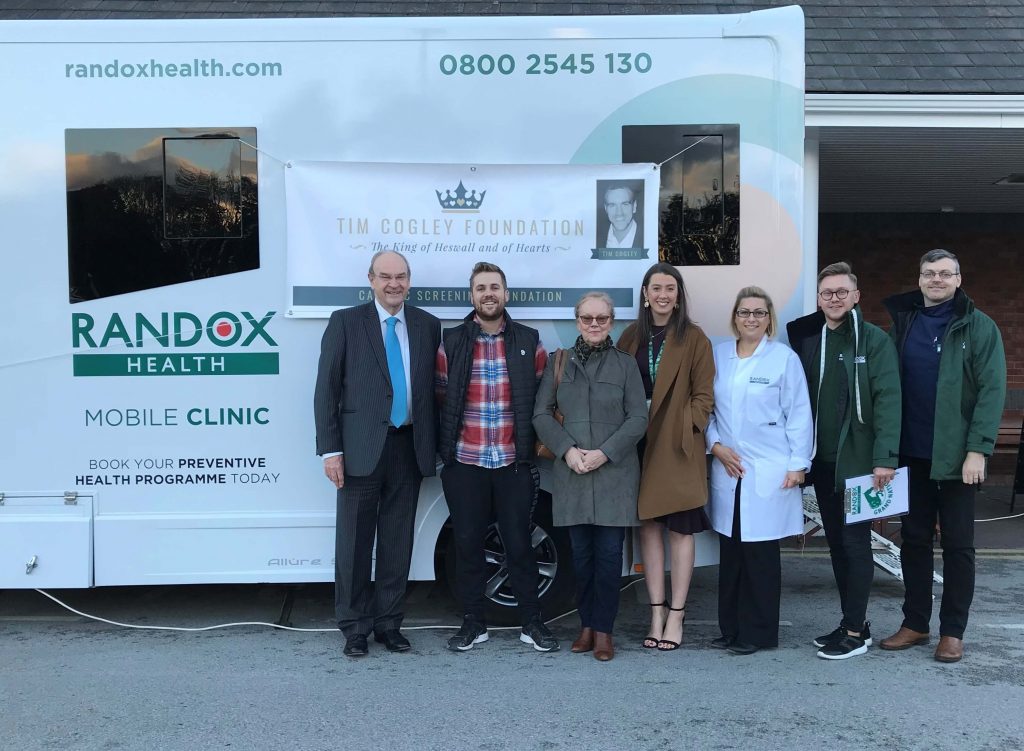 Randox staff in the UK and Ireland will be fundraising for the charity through a range of events and initiatives throughout the year, including individual staff fundraising activities and the company’s popular Christmas Raffle for staff in December.

The company will also partner with Townland Boxing Club in Glenavy, Northern Ireland.

“We are delighted to partner with the Tim Cogley Cardiac Screening Foundation in Liverpool and Townland Boxing Club in Glenavy. Both are very worthy causes close to the hearts of those living near two of our health check clinics – Randox Health Liverpool in Exchange Station and Randox Health Crumlin in Northern Ireland.

“Our partnerships with each of these charities focus on the health and wellbeing, in particular, of young people. You are never too young to start caring about your health and thinking of your future wellbeing.

“Indeed, our research and development teams have found that signs of ill-health often appear in the body at an early age but symptoms may not appear until later in life. It is paramount that the health of young people is prioritised at the earliest stage and when preventable illnesses and conditions can be stopped in their tracks or more effectively managed.”

“The Tim Cogley Cardiac Screening Foundation is dedicated to providing free cardiac screenings and education for young adults in Merseyside and the Wirral. The essence of the charity, and its whole approach of reaching out to help others, reflects Tim’s character and, in that sense, keeps alive his driving force. I can’t imagine a legacy more in tune with the generous, kind and supportive person that was Tim.”

Tim Cogley, an apparently fit and healthy 34-year-old from Heswall, England, suffered a fatal heart attack in April 2017. Despite showing no symptoms, Tim had a 75% cholesterol blockage of the left descending coronary artery. The Tim Cogley Cardiac Screening Foundation was set up by family and friends in Tim’s memory to offer free heart screening to those aged 18 to 40 within the Merseyside area, an age range where little heart screening currently is offered.

“We have enjoyed a close working relationship with Randox Health Liverpool since our inception in 2017 and are thrilled to have been chosen as one of the company’s staff charity partners.

“The money raised by Randox staff will help provide cardiac screenings and facilitate a range of educational programmes which, by sharing Tim’s story, will illustrate the need to be aware of key health indicators from a young age.

“Making young people aware of their vital signs, such as blood pressure, will go a long way in preventing future young deaths from preventable heart conditions, and we look forward to delivering this message with the help of staff from Randox Health.”

In addition to cardiac screening programmes, the Tim Cogley Cardiac Screening Foundation is committed to delivering positive, action-focused and life-changing educational sessions which focus on delivering information lifestyle changes which can have positive benefits for young people.

“The Tim Cogley Cardiac Screening Foundation has already made a difference to young people in the Liverpool area both with the detection of early cardiac issues through its free screening programme and in its education endeavours. The story of Tim Cogley is a tragic one of a life ended too soon. The courage and commitment of his family to create a positive legacy in his name is to be admired and we look forward to joining with them through this Randox staff charity partnership.”